First published 1925, my father’s edition 1948, passed down to me with all his other music books twenty years ago. 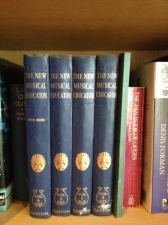 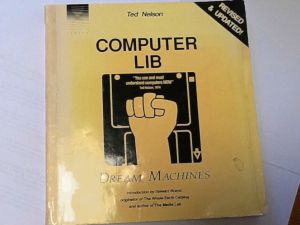 Ted Nelson is often cited as the guy who invented the term hypertext. So, I thought, let’s see what he actually said. It wasn’t easy to track down his 1973 book Dream Machines, in which he wrote at length about hypertext. I had to borrow a copy from Massey University Library in New Zealand. But what a delight this book turned out to be when it finally arrived. So evocative of the 1970s, fired by idealism, self-sufficiency, anti-authoritarianism, and plain wackiness (witness the fact it’s two books in one, and you can start at either end). Plus I’d forgotten how major a role photocopying and physical pasting played in the creation of the media of that era: reminded me of making student newspapers in the 1970s by cutting out out a story or illustration that took your fancy in another publication, and simply gluing it into the layout of your own. Thanks Ted!

We were discussing our favourite childhood books. Rebel Jacqueline was mine. By the wonderful Constance Savery, first published 1960.